Ho hey there my minions!

The OpenDungeons Team is proud to present you the newest release out of their burning and bursting dungeons! The cooking of this one has been quite long (1 year actually) as the game is getting bigger and bigger and many refinements were done, and more are still on the work.

New creatures, new graphics, new game options, new maps, new rooms, and oh, much better behaviour for our minions. I'd like to take the opportunity to thank everyone involved, Hwoarangmy, of course, as more than 90% of the codewise improvements are his, Akien for all the support he made, and Danimal, for the graphical leading contribution here.

But let's not forget Eugeneloza, I mean if you started hearing voices within the game, it was not (yet) madness, it was his fault, (if you hear voices out of the game, maybe call a psychiatrist, or is it a vet? I can't remember ...). And also to Loobinex, who challenged the gameplay, spotting several area of improvements.

The main menu just had a full revamp with scripted scene support! Nothing linked to the game, but eh, it looks good!

Plenty of new rooms to build!

Arena, Casino, you name it. Ah, and my best of the best room, the torture one, I'm so glad to finally hear the music of my enemies critters give my torturers information of even more of themselves, mwahaha, erm, well.

Even more new creatures than rooms

Yeah, the team went crazy about this one, as the new kind of food we provided them prevented any kind of sleep. All these new kind of experiment on our team members permitted to obtain a lot of new kind of creatures. Just try out our cultist, imported from the Ancient Beast project! (See: http://opengameart.org/content/dark-priest)

Status effects and spying stuff, ah ah ah. I always wanted to know what's happening someone else's dungeon, well, maybe not in the restroom, but apart from that one ...

You can now use the opendungeons to seek online game and create ones with your dearest online enemies, erm, I mean, friends, I mean you can act nice before the game, but everyone knows what happens within the dark limbo world full of gold ...

As this was quite a requested feature, alketii and hwoarangmy have refined our master server code that you can find here.
No more fiddling with your router settings ;)

A crazy amount of bugfixing, game refinement tweaks, and performance improvement fixes have been added in this new release. So it's worth mentioning. Again, our crazy wizard took the opportunity to compose the release poetry.

So, yeah, go grab it, and have a lot of fun during the coming autumn!

Welcome back once again my minions, I'm utterly disappointed to say that even with weeks of biting, slapping, tickling, smashing, and drooling(?), the Open Dungeons Team is still sane enough in a... deplorably sane way.

Still, we know our dark business, and it seems an obscure spell cast on them (involving mixing certain beverage with grandmothers' teeth, but nevermind) finally made those poor fools release something again. Let me glance at what it is... Erm.. Ah yes! 0.6.0, and with particles effects!

Yes, hwoarangmy wanted some light along those dark corridors, and added a few delightfully efficient spells with particles. I especially find the one who make them, well, burn... refreshing. Ahh, what a pleasant way to welcome our dearest dungeon friends alone in the dark, isn't it? If you're lucky to survive long enough, you may even see particles on other delightful attacks.

Those nice new spells will have to be searched in libraries of course, where you'll finally set the research order yourself. There, you will also find new surprises, like, “Oh Doors”, at last a magnificient way to lock up creatures, people and chicken away from your room when you need concentration. I can't believe we didn't think about inventing that earlier! It's even slap-proof!

New graphics have also been added, especially on the tileset, and our workers have been adding another brick on our walls to the dark tyranny! Blame Danimal for that nice remodelling. And feel free to help him about all that if you have any skills at modelling. :)

Creature mood icons! Now, you'll finally be able to tell at a glance the mood of your creatures thanks to new icons made by hwoarangmy and Danimal. You'll no longer have an excuse to ignore their endless complaints, their sleepy eyes, and their hungry stomachs. You'll have to openly admit you don't care. ;>

Several levels have been upgraded to benefit from the latest features and we also added a menu permitting to play Multiplayer levels even when you're the only one playing.
The wave portals, spawning endless waves of belligerant creatures, can now have a random team target, or a preferred one, adding some spice to existing levels.
To celebrate that new feature, a whole new world, erm... level, was made thanks to Akien who loves action levels and will show you how!

And that's not all!

Yes, my minions, you heard well. The lands will once again tremble before our evil influence spread by our tool of pure mad joy. :3 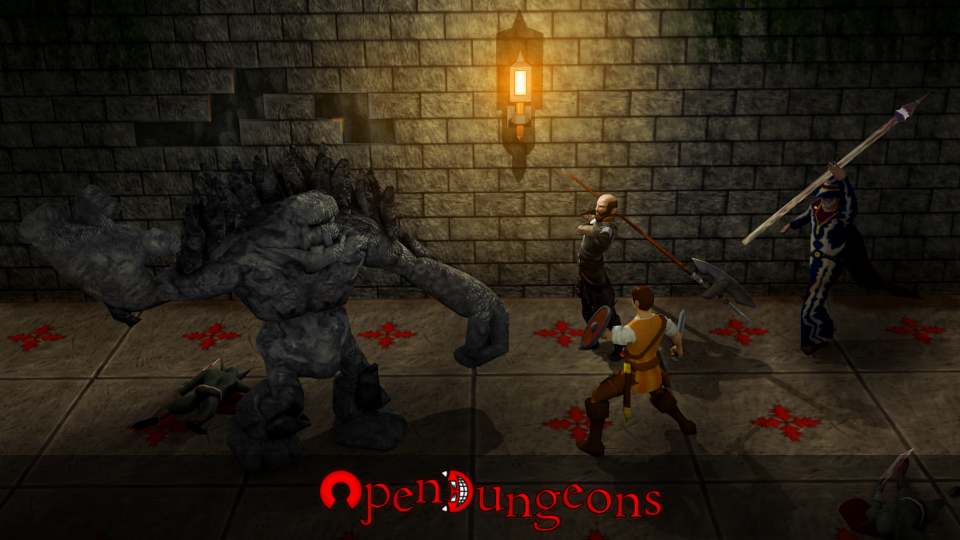 0.5.0 does also mean we're more or less in the middle of the road in the 1.0 roadmap, but all the core features of the game are already rock-solid!

Everyone in the team has been involved in making, tweaking, reviewing, remaking stuff until satisfaction (or utter faintness). And I think they deserve not being whipped for once. ;) (Maybe tomorrow...)

If you want to have a live introduction to all those features, feel free to have a look at our new gameplay tutorial video made by Akien! :D

If not, here are the most impressive achievements done in this milestone:

This enormous work and the fire it has stoked in our evil hearts has been ignited by Oln, who has been whipped worked willingly until bringing us full normal support to any game models, permitting to reach a new level of dark beauty.

One of the most lacking pieces of 0.4.9 is now a reality, you won't be able to cheat by lurking into your opponent's lair. You won't be able anymore to sneak into his dungeon while he is chasing somebody else, ... No, this is now history.

You will have to discover the bowels of the unknown territory spread before your dark will and risk their dangers to get wealth. Blame hwoarangmy for this cool feature.

Behind those two words are a lot blood. As you can now tell a creature's team or health by hovering the cursor upon it, or by pressing ALT. The skull flags will also tell the creatures level. Melee fights will never be a problem again...

You're lucky, my minions. As hwoarangmy used his darkest spells of will to chop down this feature into the box. You can now save the game at any time and load later thanks to his efforts.

Yes, Magic has finally arrived and mana is no more a useless old woman gossip from ancient legends, it's your tool for EVIL. You will have to summon worker minions with a magic spell as those lazy critters won't appear out of the temple by themselves anymore.
You will also be able to forward your fighters into battle using the well known 'Call to War' spell...

What were you thinking?!? That the gods of dark dungeons matters would provide all the technology without a counter word? No, it's not gonna happen anymore. You will now have to make your creatures work in your library to discover new rooms/spells and traps. And that's only the beginning as currently the order is predefined but later, you will be able to define your own research strategy. ;>

Improvements to the keeper hand

Smoothly moving, as a true cursor and with new animations!
Yes, we like that one and hwoarangmy did it!! It is almost perfect and hopefully one day it will be!

For a more detailed list of the new features feel free to have a look at either our release notes or the corresponding summary on github.

Go grab it firmly in the downloads and... Enjoy!!

We wish you a merry, jolly and vicious torture time with you dreadful minions. And to help you process the knight's laughable will into madness with more ease and pleasure, we are utterly satisfied to introduce you to the new version of our favourite dark magic tool.
Yes, OpenDungeons 0.4.9 is now unleashed!

So, what has happened all this year already?

To answer simply, the project had reached a stall and to make it alive again, the OD artists requested a new Windows 32 snapshot to see what they could improve. Bertram first answered the call and tried for a few weeks to make it build and run again on Windows. Even if that guy had a hard time to make it compile at the time (and was rather a noob with such deps), it permitted to point out certain problems, such as the need to upgrade the dependencies and report certain compilation problems upstream. Paul and him then paired on this one and a first Win32 snapshot went online after a month or two.

Then, by getting familiar with the code and seeing it run, Bertram couldn't leave the project like that and started proposing patches to fix this and that, helped by oln, Paul and nido at the time.

But the actual momentum happened with the arrival of hwoarangmy, and soon after with Akien, who both helped coordinating the project, and for hwoarangmy, recoded half of it (and more changes to it are incoming).

While Danimal was improving the game models, eugeneloza was on the new minions beds, and Akien was on packaging stuff and Bertram was mainly on upgrading the GUI.

A lot of features, bugfixes and cleanups happened in very little time, when you think about it.

Let's take a few lines to thank the cool team that gathered here and poured a lot of blood into the development evil cup to produce this. Hopefully, they will never realize all the foolishness it is to think they're leading the project while everybody knows Danimal is secretly pulling all the strings.
Development didn't go without brain damages, though. Bertram developed an unexplainable and pathetic fear for Big Knights, eugeneloza had to use his big voice, and Akien even had to start learning how to code.

But a lot is also planned for 0.5.0 with almost completed addition of an actual Fog of war thanks to hwoarangmy, some work on the GUI, on the materials, on more rooms, on user settings support, etc.
If you're simply curious or better if you wanna help, test, or document the next version, feel free to have a look at the issues on GitHub, and get in touch!

Some crazy guy willing to work on improving the visuals would be perfect but we'll always find a use for you, be it on testing, or down below the dungeon, tortured with some lava. ;->

Have a dreadful year, my pathetic minions.